There's enough analysis on why (http://techcrunch.com/2011/09/30…) it makes (or does not make) financial sense for Alibaba.com to buy Yahoo! There's also enough thought being put to why this might, or might not transpire (http://www.marketwatch.com/story…).

But there's a very simple, intuitive and emotional reason why I tweeted many months back in July (http://twitter.com/#!/akumar/sta…) that either Baidu or Alibaba will acquire Yahoo – it is the right logical move for a China-based Web giant to expand out to the World; with a brand that's already pretty well-established, and well-respected globally. 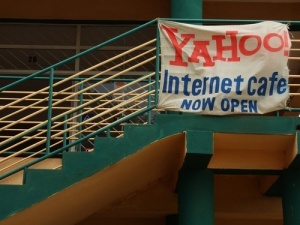 All over the world, Yahoo! has done a fabulous job staying relevant locally. Abha and I have travelled extensively, and we can report that from Costa Rica, to Egypt and Israel, to India and Japan – people might know Yahoo! is a US-based company, but they still feel it understands them like a local.

This isn't a coincidence – the Yahoo! organization has traditionally been very supportive of locally-driven product development, content generation and strategic partnerships. When I was at Yahoo!, this was sometimes maddening, sometimes infuriating – but what it did mean was that the local Yahoo! sites were able to react quicker to market dynamics, and build a relationship with their audience that was closer, than if the central US team was managing everything top-down.

Meanwhile, after conquering local markets, Chinese Web companies are ready to take on the world. While companies like Huawei haven't been afraid to go direct to the West; they have had their work cut out in establishing brand awareness. What if you could own a brand that's already well-recognized, has great market share, and not have to worry about emerging local cultural sensitivities? It'd be a no-brainer!

In short, whatever the financials look like for a Yahoo!/Alibaba tie-up, it makes a whole lot of strategic sense for a company with Global ambitions.

Previously, I was founder & CEO of Lexity, which was acquired by Yahoo in late July, 2013.

You can read more about me.